Children are becoming more trusting of what they see online, but sometimes lack the understanding to decide whether it is true or impartial. 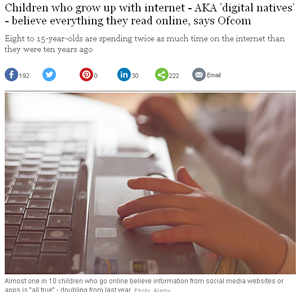 Ofcom's Children and Parents: Media and Attitudes report, published recently, reveals that children aged 8-15 are spending more than twice as much time online as they did a decade ago, reaching over 15 hours each week in 2015.

But even for children who have grown up with the internet - so-called digital natives - there's room to improve their digital know-how and understanding.

For example, children do not always question what they find online. One in five online 12-15s (19%) believe information returned by a search engine such as Google or Bing must be true, yet only a third of 12-15s (31%) are able to identify paid-for adverts in these results.

Nearly one in ten (8%) of all children aged 8-15 who go online believe information from social media websites or apps is "all true" - doubling from 4% in 2014.

Children are increasingly turning to YouTube for "true and accurate" information about what's going on in the world. The video sharing site is the preferred choice for this kind of information among nearly one in ten (8%) online children, up from just 3% in 2014.

But only half of 12-15s (52%) who watch YouTube are aware that advertising is the main source of funding on the site, and less than half (47%) are aware that ‘vloggers' (video bloggers) can be paid to endorse products or services.

James Thickett, Ofcom's Director of Research, said: "The internet allows children to learn, discover different points of view and stay connected with friends and family. But these digital natives still need help to develop the know-how they need to navigate the online world."

Most 12-15s (72%) believe that most people behave differently when they're online, with girls more likely to say this happens than boys (78% versus 67%).

More than two thirds (67%) of girls aged 12-15 with a social media account said there were things they dislike about social media. Nearly one in three (30%) were concerned about people spreading gossip or rumours and a quarter (23%) said people can be "nasty, mean or unkind to others".

This compared with just over half of boys aged 12-15 (52%) reporting things they dislike about social media.

More than nine in ten parents of 8-15s (92%) manage their children's internet use in some way - either through technical tools, talking to or supervising their child, or setting rules about access to the internet and online behaviour. Nearly four in ten parents (38%) use all four approaches.

It appears that the vast majority of children do hear the advice given about staying safe online. Some 97% of children aged 8-15 recall advice they've been given, particularly from parents.

The large majority (84%) of children aged 8-15 also say they would tell their parents, another family member or a teacher if they saw something online they found worrying, nasty or offensive. However, 6% of children say they would not tell anyone.

We are delighted to announce the launch of a brand new E-safety Support feature, the E-safety News and Information Widget.

Any member of E-safety Support can now add the Widget to their website, which will provide them with regular news, articles, definitions and up-to-date information about e-safety issues. Teachers, parents, pupils and school governors will then be able to see the latest information every time they visit the school website.

Ian Pringle from Kodo Education, publishers of www.e-safetysupport.com added, “Young people are becoming more confident about using the latest technologies, but this confidence does not necessarily mean that they are aware of the possible risks. There is a requirement for young people to be educated, and also a requirement from Ofsted that schools teach e-safety in a comprehensive manner and includes the wider school community. We are excited to be offering this new information widget to schools which will help them to communicate to the whole school population without having to add to their already extensive workload.”

Click here to find out more about the Widget, or members can visit their dashboard to find further instructions on adding it to the school website.