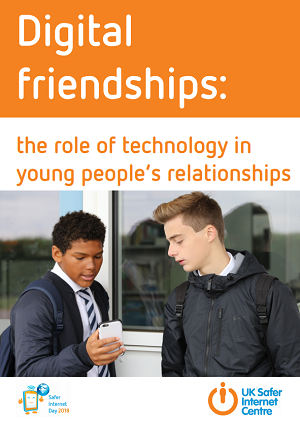 The report states that the "findings reveal how central technology is to young people’s relationship and the many different platforms they are using to interact with each other. It also highlights both the positive and negative role that technology can play in young people’s relationships and that whilst they are proactively helping to build a better internet, they also want support from the adults in their lives to do so".

The report identifies the positive effects of online relationships, with the majority of young people having positive experiences and interactions online:

Young people aged 8-17 are using a variety of methods to express themselves online with emojis being the most popular (84%) followed by slang terms (72%), facial expressions in selfies (70%) and images (63%).

Encouragingly, In the last year, 88% respondents said they had sent a kind message online to a friend who was feeling upset.

However, the report also identifies the negative impact of online relationships with over half (54%) of respondents aged 8-17 saying that they would feel isolated if they couldn’t talk to their friends via technology and two in five (40%) respondents stating that they feel left out when people post things they haven’t been included in.

Over a third of young people (36%) say that they feel that other people’s lives look more exciting than theirs on social media with girls more likely to feel this (40%) in comparison to boys (33%).

The report identifies the support that young people are seeking when it comes to online relationships with more than seven in ten (72%) of those surveyed wanting their school to teach them about cyberbullying and how to manage friendships online. However, almost three in five (58%) respondents aged 8-17 say that they feel that teachers don’t always understand their online lives and 28% don’t feel like their parents or carers do.

In conclusion, the report recommends that schools play an important role in educating and empowering children and young people to use technology respectfully, responsibly, critically and creatively, and in establishing a culture of kindness and supportiveness that promotes student wellbeing. From Computing to Relationships Education and PSHE, it is essential that education keeps pace with changes in technology, to ensure that interventions are relevant, engaging and effective. Schools play an important role in offering positive opportunities for learning and creativity, as well as helping young people to harness the power of technology to make a positive difference. This report shows the range of strategies that young people would use if something upset them online and schools can help to ensure young people both know and use these strategies to cope with any difficulties they experience.

We are delighted to have received so many entries for our SID2018 competition, supporting the Safer Internet Day 2018 theme, ‘Create, Connect and Share Respect: a better Internet starts with you’.

The competition generated some great Tweets. The judging was once again quite a challenge. However, we are now delighted to announce the winners.

Our judges said, "The pupils have all got involved in the video and the catchy tune will help them to remember the key Internet safety messages they are delivering."

Kerrie Wilson, Duneane Principal added, "We are a small school in Co Antrim and all our children were involved in our internet safety rap. The children worked together to produce the lyrics and the actions to illustrate them. One of our teachers, Mrs Cuthbertson then added a touch of her musical flair! Lucky for us the PSNI were delivering a safer internet talk and happy to lend us their car. In line with the SID2018 mantra, we wanted to create something positive which promoted key safety messages. We hoped to connect to the world in a respectful way. What’s more the staff and children had such fun making it."


The internet is written in PEN NOT PENCIL

Our judges said, "This simple message is a clear reminder that information shared on the Internet is not temporary and removing unwanted messages or information is incredibly difficult."

Tina Oakley-Agar from Felsted School added, "As part of our Safer Internet Day at Felsted School, the year 9 students took up the challenge of writing a tip on how to keep safe on the Internet. There was some lively debate about how they use the Internet, their digital footprint and the risks involved. Finally, they thought about how to write a memorable tip suitable for tweeting."

Thank you to everyone for getting involved in the competition. There were some fantastic entries and we would like to congratulate all the pupils and teachers who got involved. Well Done! All the entries can be found on Twitter @EsafetySuppport

The next ‘Safer Internet Day’ will be the fifteenth edition of the event and will take place worldwide on Tuesday 6th February 2018.

The theme for 'Safer Internet Day 2018' will be ‘Create, Connect and Share Respect: a better Internet starts with you’.

The day will give us the opportunity to think about the positive uses of technology and the role we can all play to create a better Internet. The theme encourages us to consider what we do online, the way we behave and communicate and how we should always endeavour to be positive and post positive content.

To celebrate the fantastic work being done through Safer Internet Day activities around the world, we are delighted to be running a competition for schools. To get involved, all your pupils have to do is create a Tweet based on the SID2018 theme. This can be in simple text, an image or a video. As long as it can be Tweeted and includes @ESafetySupport in the message.

To submit your school entries:

Entry is open now and schools can enter as many tips as they wish. All entries must be received before midnight on February 5th 2018 to be included in the competition. Please see the competition terms here.