A little computer gaming can assist in developing well-adjusted children 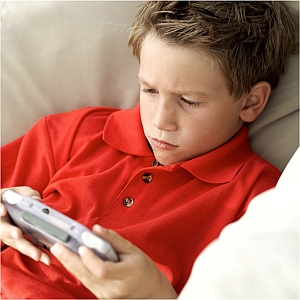 It is a common mantra from adults that “kids spend far too much time playing computer games”, and to the uninformed, killing zombies or driving high-powered cars around fictitious race tracks would seem to offer little contribution to their respective development, indeed some would go so far as to say they have a detrimental impact on young people’s lives and behaviour.

However, a study published in the journal ‘Pediatrics’ by scientists from Oxford University has suggested that engaging with video games for a short period each day could contribute in a small, but positive manner to a child’s development.

A sample group of nearly 5000 young people, half male and half female, aged between 10 and 15 years old, drawn from a representative selection of UK households, were surveyed by experimental psychologist Dr. Andrew Przybylski and questioned about how much time, on average, they spent playing console or computer-based games daily. They were then asked questions focusing on how satisfied they were with their lives, their levels of hyperactivity and inattention, their empathy and the quality of their relationships with their peers.

During the study, 75% of the young people questioned indicated that they engaged in screen-based gaming on a daily basis. Interestingly, the research suggested that those who spent more than half of the daily free time playing games are not well adjusted and hypothesised that the reason for this is that they were less likely to get involved in other enriching activities as well as being exposed to content that is inappropriate, designed, as it were, for adult consumption.

The particularly fascinating result within this study, however, suggests that in comparison to children who are non-players and those who are frequent players, those who play games for less than one-third of their daily free time (usually less than one hour) appeared to possess the most developed abilities to socialise and have less friendship and emotional issues. They also reported less hyperactivity than other groups.

Contrary to popular opinion, fuelled by misinformation in the press, Dr. Przybylski suggested that:

“These results support recent laboratory-based experiments that have identified the downsides to playing electronic games. However, high levels of video game-playing appear to be only weakly linked to children's behavioural problems in the real world.”

It was also his opinion, based on the research, that the small positive effects that were observed for the low levels of game play did not necessarily support the suggestion that screen-based games could, by themselves, somehow, assist children’s development in the increasingly technological world.

In concluding Dr. Przybylski encouraged further research to investigate the particular elements of games that may make them either beneficial or harmful. He also suggested that further study should be carried out within the context of children’s social environments, such as their families, friendship groups and wider community and whether these aspects impact on how gaming experiences influence young people.

In my experience as an educator and a parent, I have found that, like with any pastime or hobby, if a child becomes too obsessed with the narrow focus of a particular interest at the expense of other activities, then it can have a negative impact on their development. Think about any kids in your school who are completely consumed by their interest in football, heavy metal music or even their appearance and, I think you will agree that this can occur with anything. The difference with gaming occurs because they are specifically designed using aggressively engaging principles to draw players in and hold their attention for long periods of time. Applied to young people with susceptible minds, who may use gaming as a means of escaping a dysfunctional family environment or a bullying situation, this, in my opinion, can potentially have a serious detrimental impact on their behaviour and development.

In your experience with young people, do you agree with the results of the study? Do you feel that computer games are harmful or beneficial to young people? Does gaming have a place within the formal education arena? We would love to read your comments so please feel free to share them below.