New report reveals what kids think about war and terrorism 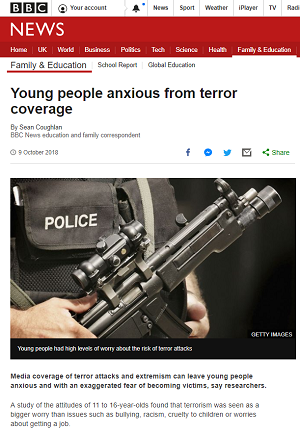 A new report reveals how much children worry about war and terrorism and why – and if they don’t worry why not? It also looks at what solutions children have for making the world a safer place to grow up in.

The CHILDWISE What Kids Think About…War and Terrorism report interviewed a representative sample of 1,557 children aged between 7 and 16.

“This report takes a step back and allows children and teenagers’ words to speak for themselves, in turn allowing us to understand their thoughts, feelings, and opinions on the subject of war and terrorism,” says Dr Helena Dare Edwards, CHILDWISE researcher.

“It’s not often that adults hear what kids think about subjects like war and terrorism. But these matters affect them so they have a right to a voice,” says Helena.

As reported by the BBC, the report claims that "Media coverage of terror attacks and extremism can leave young people anxious and with an exaggerated fear of becoming victims", adding that "terrorism was seen as a bigger worry than issues such as bullying, racism, cruelty to children or worries about getting a job."

Dr Reza Gholami, a leading academic in this area and a senior lecturer in sociology of education at the University of Birmingham, wrote an independent foreword to the report. “The findings should act as a wake-up call,” he says.

“This report by CHILDWISE has immediate and long-term value to policy makers, the public sector, including educators, third sector and civil society organisations and, of course, the general public,” adds Dr Gholami.

Previous research by CHILDWISE has shown war and terrorism are top concerns among children. This latest report expands on this finding.

“The focus of the report rests on children’s own words, with their responses complemented by analysis and interpretive commentary to illustrate difference across age and gender and to highlight both majority and minority viewpoints and everything in between,” says Helena Dare Edwards.

For a range of anti-radicalisation and PREVENT resources including teaching materials, parents guides and staff training, join our Safeguarding Essentials service.

Written by Safeguarding Essentials on October 11, 2018 11:02
Tagged with: childwise anti-radicalisation PREVENT terrorism
For children and teenagers, it is increasingly all about mobile 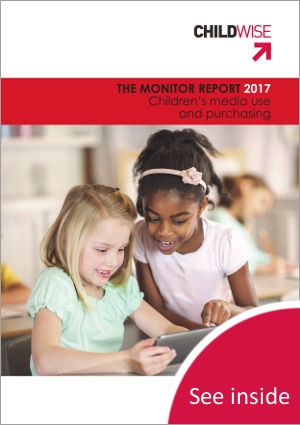 This year sees the resurgence of the mobile phone among five to 16 year olds, according to the latest 2017 CHILDWISE Monitor Report. Smartphones are now the default device for music, online access, gaming, video content and reading (after printed books), as young people seek endless entertainment - anywhere and everywhere.

The new data shows the extent to which the mobile phone now dominates children’s media experiences, with ownership increasing steadily – especially among primary aged children – and usage more varied than ever before. For the first time ever, children are now more likely to use their mobile phone to go online than for any other purpose, including texting or calling.

The 2017 CHILDWISE Monitor is a comprehensive annual report looking at five to 16 year olds media consumption, purchasing and social habits as well as key behaviour. Around 2000 children in schools across the United Kingdom completed in-depth online surveys for the report.

The report also reveals that tablet ownership has reached saturation point after years of rapid growth. Two thirds of children have their own touchscreen tablet at home.

Simon Leggett, research director from CHILDWISE says: “Our research suggests that children now expect to be constantly entertained. They want to fill every free moment they have. Tablets were a gateway to apps and the internet for many children – they were the technology of choice and widely endorsed by parents. Children now expect the same level of functionality when they’re out and about, and the mobile phone delivers that” says Simon.

“Children expect to access their favourite media at all times, whether it is games, music, video content or social media,” adds Simon Leggett. The report suggests that it is unlikely that tablet growth will increase much further, with two in three children now owning one.

“Tablets are not as portable as mobile phones and they don’t work ‘on the go’ as easily as a mobile phone. This is why we have seen a modest resurgence of the mobile phone, which children can have with them and use at all times to fill any moment of boredom with gaming, viewing YouTube videos, catching up with social media or listening to music.”

“The mobile phone is increasingly becoming a preferred go-to multimedia gadget for children overall. For primary aged children particularly, exposure to what a tablet can offer has left them wanting more, especially when they are outside the home.”

“Children are now becoming adept at the positive skills of multi-tasking, prioritising and filtering through the huge amount of content available to them. When they find something that interests them, they will engage fully.”

Most children say their use of technology helps them learn and develop new interests. However, a significant minority are concerned about their over reliance on them. Around one in four find it difficult to go several hours without checking them, say they have missed out on sleep because they have spent too long on gadgets and would like to spend more time away from them.

Three in 10 children say they have to check their connected devices every few minutes.

Most teenagers break rules set for them for internet use and a significant minority of nine to 12 year olds go online longer than they are allowed, or when they shouldn’t.

Findings of the report also include… 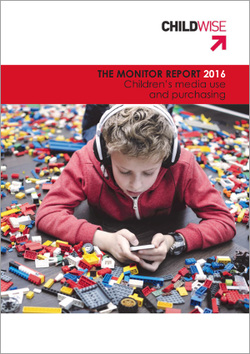 This year has seen a major shift in UK children’s media use with time spent online overtaking TV viewing for the first time ever, according to the latest 2016 CHILDWISE Monitor Report.

Tablet ownership also soared this year – up by 50% from last year. Just six years after the UK release of the iPad, tablets have swept into children’s lives, with two in three (67%) now having their own device.

The new data shows that YouTube has taken centre stage in children’s lives this year to become the place they turn to for entertainment, music, games, TV programmes, instruction and advice. Half use the site every day, almost all do so on occasion.

Children are also going online more in their bedrooms. Three in four children (73%) can now access the internet in their room, up from two in three (63%) last year.

The 2016 CHILDWISE Monitor is a comprehensive annual report looking at five to 16-year-olds media consumption, purchasing and social habits as well as key behaviour. More than 2000 children in schools across the United Kingdom completed in-depth online surveys for the report.

“Growing access to the internet at any time and in any place, and a blurring of television content across channels and devices, brings a landmark change in behaviour this year. TV viewing has been redefined,” says Simon Leggett, Research Director from CHILDWISE.

“Children are now seeking out the content of their choice. They still find traditional TV programmes engaging but are increasingly watching them online and on-demand or binge watching box sets.”

This year, for the first time, tablet devices have overtaken laptops/PCs/netbooks as the main type of computer that children have in their homes. Four in five children (79%) now live in a house with a tablet device in it. This is a significant rise from just three in five (61%) last year.

Findings of the report also include...

For the first time the CHILDWISE Monitor report asked children age 7 to 16 that used YouTube who their favourite YouTubers were or what were their favourite channels on the site.

The YouTuber with the most mentions was fashion and beauty vlogger Zoella. She was a favourite among girls with 15% naming her as favourite and 8% naming her overall.

TheDiamondMinecart, real name Daniel Middleton, posts daily videos about the popular game Minecraft. He was popular among boys, chosen by 6%, compared to 4% overall.

“This is the year YouTube use has exploded among children with almost half (48%) using it every day and just 10% never using it,” says Simon

“Around a third of children who use YouTube watch vlogs/blogs. Girls are much more likely to be interested in these than boys and viewing is highest for older children, peaking at half of 11-12 year olds.”

“Children of all ages, both boys and girls, find somebody to follow on YouTube who speaks directly to them and reflects their interests, coming across as authentic and unmediated,” Simon added.

“For older girls, vloggers are filling the role previously held by magazines – somewhere to read about other people’s lives, problems, cringes, new ideas and fashion.”

Boys of all ages enjoy FIFA football gaming commentary by vloggers such as Joe Weller and Miniminter. Younger boys like Minecraft gameplay vloggers such as TheDiamondMinecart, Stampy and iBallisticSquid. Older boys favour KSI

CHILDWISE is an independent market research agency specialising in children and young people.