July marked the first anniversary of the World’s first scheme set up to give confidence to the public that venues who provide publically available WiFi were barring access to pornographic or child sex abuse websites.

The scheme ensures that the provision of Public WiFi Service is safe and meets an agreed industry standard as agreed by the UK Prime Minister, David Cameron in July 2013.

The UK Government were the initiators behind the scheme and have provided continued support with direct support coming from Minister Ed Vaizey who was instrumental in the development. The recent appointment of Baroness Shields OBE as Minister for Internet Safety and Security further strengthens the Government’s commitment to internet safety.

Baroness Shields stated:
“The Friendly WiFi scheme has been a great success and is another example of how the UK is leading the world when it comes to making the internet a safer place for young people. I am delighted that organisations like IKEA, Queen Elizabeth Olympic Park, the Maudsley Centre and the City of York Council are joining the current members who are setting the bar for the responsible provision of public WiFi. Parents can take comfort in knowing that their children are protected from harmful content in these zones, and wherever they see the Friendly WiFi logo."

John Carr, Secretary of the UK's Children's Charities' Coalition on Internet Safety commented:
WiFi is a key pillar of our hyper-connected, always on world so it is essential that every company or organization that is involved in supplying it to the public thinks about their responsibilities towards children and young people. Friendly WiFi is the only scheme that checks to ensure that public WiFi meets a given standard, regardless of the individual WiFi provider. It is a testament to the success of the UK’s Friendly WiFi scheme that it is now being launched in the USA. I look forward to seeing Friendly WiFi grow and expand over the coming years.”

Beverley Smith, Director of the RDI commented:
“The first year of the scheme has been fantastic and it has been a real pleasure to work with all brands involved as well as the brands I am currently discussing the scheme with. To see the expansion of the scheme across all types of venues is achieving exactly what the scheme was developed to do” 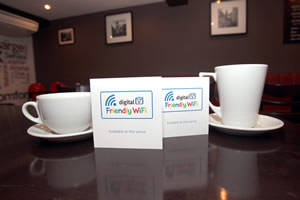 Forerunners of the Scheme included Tesco and Starbucks.

Josh Hardie, Responsibility Director for Tesco stated:
“Friendly Wi-Fi means parents can be safe in the knowledge unsuitable content isn’t accessible through our wireless networks. We want to make sure children are properly safeguarded in our stores and we’re proud to be one of the first organisations to sign up to the scheme. ”

Simon Redfern, Communications Director for Starbucks commented:
“We’re delighted to have supported the Friendly WiFi initiative from the outset. We have exciting WiFi upgrades taking place over the next few months and our customers will soon be able to enjoy a faster service with the reassurance they are in a friendly and safe environment both online and in store at Starbucks.”

Expansion of scheme to the United States
RDI has been working to bring the Friendly WiFi Scheme to the United States with internationally known Internet safety expert, Donna Rice Hughes, CEO and President of Enough Is Enough (EIE), a U.S. based not-for profit organisation whose mission is to make the Internet safer for children and families. EIE launched the National Porn Free WiFi campaign in the United States in 2014 by targeting key brands such as McDonald’s and Starbucks to lead corporate America to adopt a minimum standard of filtering to ensure that pornography or child sex abuse images can’t be accessed whilst using their free Wi-Fi services

Donna Rice Hughes, President ‘Enough is Enough’ US stated:
“Corporate America needs to exercise responsibility to be part of the solution to keep children and families safe while using public WiFi services. The Friendly WiFi accreditation scheme is a win-win for the Corporation who offers filtered and friendly WiFi and is well positioned to become the good housekeeping seal of approval to help guide consumers where to go to use safe Wi-Fi in the U.S.”