Online safety charity Childnet call on young people to ‘Be the Change’ and enter the 8th Childnet Film Competition.

"Over the past eight years, hundreds of young people have taken part in our Film Competition, demonstrating their incredible creative skills as well as educating and inspiring their peers about staying safe online. It’s clear to us that young people can be creators of change and help shape a better internet for all."


Be the change – taking part
The Film Competition is split into two age categories and schools or youth organisations must oversee and submit entries on behalf of all participants. Childnet have developed resource packs including storyboard templates, guides to filmmaking and other useful documents to help schools and youth organisations engage and support young people in making their films. The top three films in each category will be invited to a private screening at the BFI in London and the winners will be awarded film kits for their school or youth organisation.

For both age groups Childnet are looking for creative, imaginative films which reflect a positive and inspiring message. Young people might express their ideas through comedy, animation, or music. They will be encouraged to consider different filmmaking styles such as creating an advert, campaign or documentary. 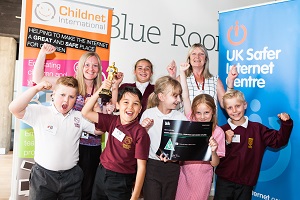 As one of the Secondary school category finalists from 2016 said about their film:

"The message of the film is to think about how many people there are on the internet and how easy it is to make differences to the world. The way your actions, even very small actions, can affect millions of people quickly is both scary and useful at the same time, and you must remember that it is your choice to affect people positively or negatively."

In order to register a group of talented young people you know, then please send an email to film@childnet.com for an information pack. The closing date for entries is Monday 12th June 2017 at 5pm.

Join the conversation on social media
To inspire young people to help others stay safe online, entrants are being encouraged to share their film competition stories on social media using the hashtag #bethechange. Whether this is a message about the issues being explored, a picture from the creative process or even a tip from the young filmmakers, schools and youth organisations can share their updates with @Childnet.

The judges
The winners will be decided by our expert panel which includes: