Is the mental health of young people being adversely affected by Social Media? 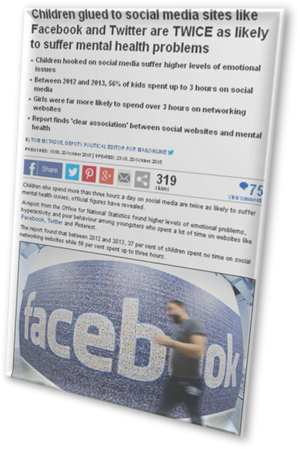 Kate Winslet has recently been very vocal about how social media is banned in her household. A mother herself, she has openly said that in her opinion, the unhealthy obsession of thinness and the media's idea of beauty leaves her in no doubt that it causes women (and girls especially) to suffer low self esteem and potential mental health issues. Controversially she has also gone further in this argument by stating that parents are losing control and that smart phones should be confiscated off teenagers for good.

She is able to put her money where her mouth is too as she has a clause written into her L'Oreal contract preventing them from airbrushing or retouching her photos. In 2003 she bitterly complained very publicly about how GQ magazine in her words 'reduced the width of her legs by a third' on the front cover of the magazine. She flies the flag for the representation of 'real women' (as she puts it) and it's her opinion that social media has encouraged girls to fashion themselves for the purpose of near strangers to 'like' their pictures.

I share her concerns to an extent. I conducted a survey recently through an online mums group with 4000 users. I really wanted to hear real life stories from parents about whether they agree they are losing a battle against the draw of social media sites and if they felt deep down that it is adversely affecting their teenagers lives.

It's difficult to admit you should be doing something when you're not. All parents know too much online time is never a good thing. The results of my questionnaire reflected this. Nearly all parents agreed that their teens spend far too much time on devices and that any sort of phone amnesty was met with strong resistance and disdain. Parents of girls were very keen to identify a lack of advice and guidance on the subject and it was obvious that they felt they needed more information about the risks to childrens mental health. They were shocked at the amount of apps dedicated to photo manipulation too - they spoke of teens being open about desiring comments and likes and gaining the maximum number of followers as possible.

Other concerns were voiced about saturation of social media 24 hours a day, online bullying and general spitefulness toward each other causing distress and anxiety (not to mention the affect this has on learning and taking up precious time at school trying to pick apart online disputes).

This concurs with a Daily Mail story recently that had the headline 'children glued to Facebook are twice as likely to suffer mental health problems'. They claim 56% of kids spend more than 3 hours a day on such sites. Parents biggest concern was how they noticed their child's mood altered during or after usage. Large numbers of families stated that there were marked changes in attitude and distress according to what was posted by viewers. Worrying information. To kids of the 80's like me it’s definitely something we find hard to relate to as growing up in a non technological world now seems very simple, innocent and appealing. So, as our first generation digital natives mature, are we yet to see the true consequences of their excessive social media exposure?

According to a national survey conducted in the US, the research provides a more positive outlook. Their findings illustrate teenagers are using social media for much more positive reasons. Headline statistics show teenagers aged 13-18 are sourcing health information online from social media sites that positively influenced them to change their behaviour about diet, exercise and well being. Far from technology being a catalyst for anxiety and depression, instead it was a self help tool for them that made a difference.

Apps and sites have cottoned onto teenagers growing interest in healthy living and it seems that it is the reference of choice for 67% of young people. It also seemed that young people use it as an ongoing support network, using social media as an instrument to aid continuing success. They report to enjoying online friendships from empathic young people, especially about issues such as bullying, eating disorders and obesity. One of the most popular online searches was not surprisingly to do with sex and relationships. Being an SRE teacher myself, I know and understand the reasons why young people seek information online. Every time I ask the question ' please put your hand up if you talk to your parents or teachers about sex?' ...the tumbleweed blows through the classroom. I can see the appeal of looking up intimate information in private and anonymously and without judgement. So for that reason I can safely say that websites such as Bish and Brook prevent a lot of teenagers contracting STI's or keep them safe from unwanted pregnancy.

So, does this information infer that it's all about developing a healthier relationship with social media and not ruling your life by it? Teenagers, by the very fact they are teenagers will lean on the side of rebellion, push boundaries, take risks, show a lack of self control at times and perhaps an inability to truly understand consequences for actions. So again the way forward seems to lie in educating young people about the pitfalls and challenging the notion that it should rule our lives or define us as people.