Report shows surge in tablet and computer use among pre-schoolers

The latest figures from the CHILDWISE Monitor Pre-school Report show that 73% of children under five use tablet computers and phones – up from 27% in 2012. 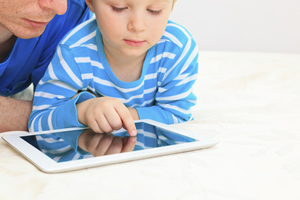 By the age of two, most children are now using these devices, with access not far off universal by the age of four.

“Pre-schoolers appear to have rapidly adopted the tablet. It has quickly emerged as a most-wanted device for children, even among the very young – and parents have encouraged this,” says Childwise research manager Jenny Ehren.

Childwise is a leading, independent research specialist in children and young people. This latest report examines the media and purchasing behaviour of pre-school children and their parents.

More than a quarter of pre-schoolers have their own computer or tablet, according to the new data. One in two use a mobile phone. The number using apps has soared since 2012 with more than half now using them.

“Parents consider tablets and the games and apps on them, as a great way to keep small children entertained and provide a learning benefit. The length of an average session is testament of parent’s approval, with toddlers typically entertained for around one and half hours at a time,” says Jenny Ehren.

Greater access to on-demand services is undoubtedly a contributory factor in the length of these sessions, along with the creative world of games and applications. One in six pre-schoolers also use a tablet or computer to video call family and friends, using applications such as Skype and FaceTime.

The report shows how pre-school children and their parents are increasingly focusing their viewing attention towards on-demand services. Three out of five households now use these to some extent.

This generation of children is growing up with the internet’s new mode of serving and searching for content, and they can decide what they want to watch and when. By age 3-4, the majority are using these services to access their favourite TV shows.

Pre-schoolers account for around a third of all children under the age of 16 and are an important demographic, both in terms of numbers and because these are their earliest years, when patterns of behaviour and attitudes are first established.

Studies have previously shown the older the child, the greater the likelihood that they will own and use computers, smartphones and the internet. However, this new report breaks the traditional correlation previously seen between increasing age and device ownership.

By four most youngsters are self-sufficient on a tablet or computer and a significant minority are becoming independent players across the spectrum of mobile phones, TV and the internet.

The annual CHILDWISE Pre-School Report talks to more than 1000 parents of 0-4 year olds, asking about their children’s media use and parents’ spending habits.

Written by Safeguarding Essentials on October 15, 2015 13:30
Tagged with: devices
Previous story
Next Story