The Troll in the classroom

E-safety for schools is about more than safeguarding the pupils 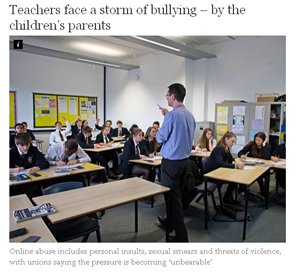 Teachers are facing a growth of incidents of online abuse, including name-calling, personal insults, sexual smears and even threats of violence from both students and their parents.

In the past, the most abuse that teachers could expect was maybe a bit of cheeky back chat, which would be quickly dealt with, with nothing much more than a stern word and a detention and if parents asked the child why he/she had been detained then their reaction would be along the lines of “Good! I hope you learn your lesson and don’t do it again?”

These days, however, there has been a quantum leap in the attitude to teachers by some parents and, digital technology, along with all the positive opportunities it offers, has provided these parents with a sinister outlet to vent their anger when they find out that their ‘pride–and-joy’ has been reprimanded (nearly always wrongly, in their eyes) for some misdemeanour.

Increasingly, teachers are having to endure online abuse from not only students, but their respective parents as well. This growing abuse includes personal insults, accusations of paedophilia or of having sex with students, as well as racist, sexist and homophobic remarks and threats of violence towards teaching staff.

Incidents include a parent informing a teacher on social media that they were “rubbish” and that she was a “bitch” who attempted to kill their daughter by making her do P.E. and not allowing her to use her inhaler – an accusation that the teacher vehemently denied.

Another member of staff, who was heavily pregnant at the time, received vile comments such as “I hope she gets cancer” and “ugly [expletive] bitch”. She also had an abusive Facebook account established in her name. Other teaching staff described how pictures, which have been taken of them in the classroom, without their knowledge were uploaded and then commented on in a flurry of expletive-laden insults.

Now, some may say, “Well, it’s just kids being mischievous; teachers should have a ‘thick skin’ and be used to this sort of behaviour”. But, in reality, as one teacher experienced, who would put up with being sent sexually explicit abusive messages over a prolonged period of nine months? I would hazard a guess, not many!

But surely, don’t teachers report these instances to their senior management team?

Yes, they do but, as the unions report, in an educational world ruled by league tables and Ofsted ratings, schools and head teachers are reluctant to get involved because they don’t want to annoy parents and risk the reputation of their school.

In a survey conducted by the teaching union, the NASUWT, it reported that 60% of 1500 respondents had suffered abusive comments on social media sites by students and parents in comparison to just 21% in 2014. Worryingly, this rise appeared to be entirely attributable to an increase in the number of parents posting abusive remarks.

As a consequence of this problem, coupled with a myriad of other pressing issues within the teaching profession, research in ‘The Independent’ in early April 2015, reported that around 40% of teachers quit within their first year when the harsh realities of life in the classroom become too much.

The issue of the online abuse of teachers is a very real problem that, if not dealt with urgently, will only get worse and potentially contribute to the growing crisis within the teaching profession, but, if it is to have any chance of success, it will require a cohesive plan and the collaboration of stakeholders from education, Government and the social media industry.

If you would like to share your experience on this topic, please use the comments section below.