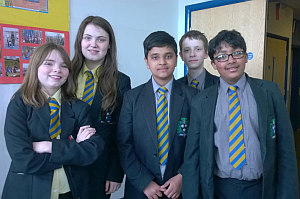 The Digital Leader scheme came out of an idea from a network manager’s course that I attended. I saw it as having potential to both assist me in my role and at the same time provide a fantastic opportunity for the interested students who volunteered to take part.

So, during our annual 'Activities Fair' I set up my stall with sign up slips to express interest, a few nice posters and some hand-outs and decided to test the interest of Year 8. My plan was to start small with just eight or ten students, who could do the job until Year 10. Next year I could take on another group from Year 8 …and the following year another. After Year 10 students would finish to concentrate on Year 11 exams. So that the total number of Digital Leaders in school would grow to a total of roughly 24 to 30 students from Years 8, 9 and 10.

The outcome of the exhibition was that I might have ‘oversold’ it with almost half of the 280 strong year group signed up. So then I had the dilemma of whittling these down to just a few.

Using our VLE, I decided to get those signed up to reply to me via internal email with a sentence or two on each of three questions:

Most didn’t reply, one or two were silly, some had obviously not ‘got it’ and I soon quite easily came to ten students.

Our first Digital Leaders ‘mission’ is now out of the way, which was specifically to engage parents in Safer Internet day a couple of weeks ago. We invited in parents for two possible sessions, one in the afternoon just before school finished to attract parents who might ordinarily pick their kids up from school and a second session later in the evening. Parents booked into each session online. The team prepared Parent Packs (of which 80% was material taken from the resources available to us by subscribing to E-safety Support. The value of this content was very easily offset in just one go if I had to account for the time that it would have taken me to produce these resources myself). They also rehearsed little bits of interjection into the presentation where they would offer information and personal experiences to support facts outlined in the PowerPoint.

These talks were a great success and the feedback we collected was extremely positive. We concentrated on giving parents the most practical advice, information, and resources that we could so that they could actually all go away and do something straight away to help their own particular e-safety scenario at home.

We are currently on a little one week special project ‘break’ to design a pin badge for ourselves as Digital Leaders, which they will be allowed to wear on their blazers. The ‘team’ have had a couple of short lessons in how the school’s wired and wireless networks are put together involving tours of server rooms and comms cabinets on the site.

This week we are going to split into two groups, one starting to do some basic Python coding and another in looking at supporting some of the technology that we already use in classroom environments.

Over the coming weeks and months, we will be telling you more about the Digital Leaders projects and how the students are taking a lead role in e-safety awareness around the school.

To find out about the inspiration for the project, click here.