Helping your students to report bullying directly to your school

Technology is forever evolving, as are the bullies. Gone are the days where victims of physical or verbal bullying longed for the 3 o’clock school bell, signalling the final challenge of missing the bullies at the school gates, knowing that the safety of home was only a stones throw away. The only bell that can be heard now is that of a mobile phone, iPad or laptop signalling a Facebook or Twitter notification from those bullies still standing at the gate.

As a child who suffered from both physical and cyber-bullying, trying to stay safe online and avoid the bullies was the hardest part. Whether at school or at home the Internet found me. There was no escape. Having just made the transition into high school, I was an easy target. But my greatest challenge was knowing where I should report these cases of bullying to. Learners today face many different types of problems both in and out of the classroom. Racist abuse, Mental Health issues and Revenge porn just to name a few. But how and where do learners report these incidents?

As technology has evolved so does the need for schools to be able to adopt technology that allows their learners to be able to report these incidents. Providing an email address or reporting form on a schools homepage is simply dangerous as schools are unable to trace reports and monitored types of case that are being reported. After extensive research and working as a learning mentor in both Primary and Secondary schools, I realised that there was no safe, stand alone secure system for schools to allow their learners to reporting bullying and any other incidents directly to them.

In 2014 I launched tootoot! www.tootoot.co.uk - an online anti-bullying tool for schools - allowing students to report bullying anonymously and safely, directly to their school. Tootoot is rolling out nationwide and is already helping thousands of students report incidents of physical, verbal and cyber-bullying online. Tootoot is currently being used across the UK by schools to help their learners speak out.

The benefits of using the tool come from the whole school community, as demonstrated by the comments from our users:

"Tootoot lets me report anything to my school, whether I'm in school or at home on my mobile phone" - Jordin, Student

"Tootoot has allowed our students to report incidents safely and anonymously in school and from home, directly to me" - Katie Malley, Deputy Head Teacher, Werneth Primary School

"Tootoot has given me peace of mind knowing my child can report any issues or worries to her teachers, in confidence" - Colin Young, Parent, Berwick Academy

Research suggests that nearly 70 % of children in the UK have had some kind of bullying experience – yet bullying is a sensitive and complex subject which can be difficult to talk about. One way to tackle it is through the inclusive and accessible medium of film. To tie in with Anti-Bullying Week 2014 (November 17-22) Into Film, an education charity supported by the BFI with Lottery funding, has developed a new resource featuring six carefully selected films – three for primary and three for secondary - to promote discussion about bullying and related themes such as friendship, on-line safety, standing up for what is right and the power of groups, positive and negative. Films are free to order for all schools with an Into Film club.

Titles for primary in are Diary of a Wimpy Kid (2010, PG), South African animated adventure Khumba (2013, U) and inventive computer-animated caper Wreck-It Ralph (2012, PG); related activities include watching and discussing a short film about bullying made by young people, mind-mapping and writing techniques to define what bullying is, creating a series of tableaux and planning a two-minute campaign to counter bullying. Incorporating the vital theme of cyberbullying, titles for secondary are The Social Network (2010, 12), about the founders and impact of Facebook, tense British drama UWantMeToKillHim (15, 2013) and futuristic sci-fi movie Ender’s Game (2013, 12). Related activities range from a Character crossroads discussion and worksheet to researching successful people who were bullied as a child, and creating an educational Talking Heads film about different types of bullying and how to stop them. Download the resource here.

Other great resources from Into Film which can be used for Anti-Bullying Week are InRealLife, which uses the hard-hitting documentary of the same name to explore a range of issues relating to the Internet including cyberbullying, and Staying Safe Online, with films and activities for primary and secondary linked to e-safety. All resources are available to download from the website.

Into Film is an education charity that puts film at the heart of young people’s learning. Into Film Clubs are FREE for all state funded schools and non-school settings and offer free access to thousands of films and education resources for learning through and about film, as well as opportunities to learn about filmmaking and go behind the scenes of the film industry. Inclusive and accessible for all students, film clubs help promote young people’s social, moral, spiritual and cultural development helping schools achieve OFSTED requirements.

Supported by the BFI with Lottery funding, together with funding from the film industry and a number of other sources, Into Film incorporates the legacy and staff of two leading film education charities, FILMCLUB and First Light, building on their experience and success in delivering programmes of significant scale and reach to children and young people across the UK.

For further information about Into Film and to start an Into Film Club visit: www.intofilm.org/schools-film-clubs or call 0207 288 4520.

Written by Safeguarding Essentials on November 20, 2014 10:41
Tagged with: ofsted cyberbullying bullying into_film
Can your school help beat cyberbullying – one rhyme at a time?

This year, Anti-Bullying Week (17th-21st November) is calling on the school community to take action to stop the bullying of all children and young people. With more and more children owning mobile devices and spending longer online and on social media, cyberbullying is becoming one of the most common forms of bullying and the source of increasing distress to children and concern to their parents and school leaders.

That’s why Internet Matters is helping to raise awareness of the important issues of online respect and cyberbullying by launching an exciting competition with the Anti-Bullying Alliance. The competition asks schools to create their own song, rap or poem on the subject of being respectful to others online to generate important discussions of this issue amongst students, teachers and parents, both inside and outside the classroom. The winners will be chosen by a panel of judges including singer and Internet Matters ambassador, Sophie Ellis-Bextor:

“I’m really excited to be part of a competition that raises awareness of such an important and growing issue for schoolchildren today. I’m looking forward to hearing about how children themselves feel about cyberbullying and their thoughts on tackling it together – I’m sure there will be some inspirational entries.” 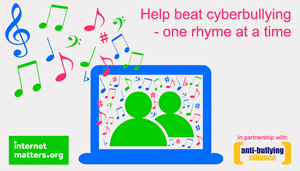 There are separate competitions for Primary and Secondary schools. The winning Primary school will receive a visit and inspirational assembly from Olympic medallist Christine Ohuruogu MBE, and the winning Secondary school group will enjoy a special daytrip to Sky’s TV studios in West London where they’ll make their own film.

To support schools participation in the competition, there’s also a lesson plan for teachers on how to help children understand the issues and lead into the creation of their competition entry. This includes notes on how the activity supports the wider curriculum.

The competition is open until 28th November 2014 with the lesson plan and full details about how to enter on the Internet Matters website. Start getting creative!